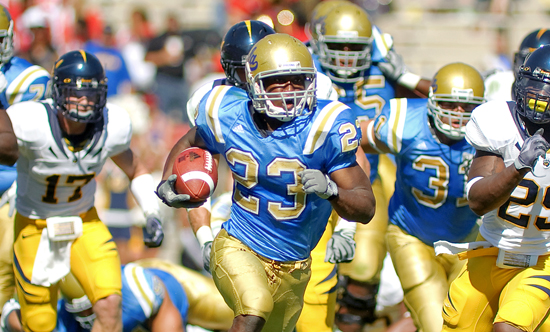 It took the UCLA football team as many weeks to stay undefeated as it did to fall to .500.

The Bruins suffered their latest defeat at the hands of the California Golden Bears at the Rose Bowl on Saturday, their third consecutive loss to a Pac-10 opponent.

But as UCLA readies itself to take on the Arizona Wildcats in Tucson, Ariz., this weekend, the auras of hope still kindle.

“Optimism is still a full trough here at UCLA,” coach Rick Neuheisel said during his weekly press conference Monday. “There is certainly good things to be gleaned from the tapes; that gives you hope.”

Neuheisel cited the resilience of the “people in our program” as the source of his hopeful outlook as he looks toward the second half of the season.

Against Cal, redshirt freshman quarterback Kevin Prince put up big numbers. He completed 21 of 41 passes for a career-high 311 yards. Prince began opening up his deep game with three completions of at least 29 yards, including a career-best 48-yard bullet to redshirt senior tight end Logan Paulsen.

Despite throwing a late-game interception that was returned for a touchdown, Prince made notable strides in increasing his offensive output.

Neuheisel said Prince will get the ball this week against Arizona.

Other improvements the coach noted include the attentiveness of the offensive line.

“Each week we go and look at our offensive line from a year ago (for game planning purposes), and there was a huge difference,” Neuheisel said.

Against the Golden Bears, Franklin amassed 101 yards rushing and two touchdowns on 11 carries, recording his second 100-plus-yard game this season.

As for Moore, he led the Bruins with nine tackles, tying his career high, including one for a loss and a deflected pass. He is first in the Pac-10 in passes defended.

Despite the marked positivity in the coach’s voice, he also recognizes the facets of the game that need specific and earnest attention.

At the press conference, the inefficient tackling on the part of the Bruins’ defense bred discussion ““ a departure from the typical weekly analysis of the offense’s struggles.

Neuheisel commented on the lack of balance on the defensive side of the ball and the failure of the defenders to “accordion the motion” of Cal’s offensive weapons as the Bears freely executed their routes.

Practice this week, the coach said, will address the fine details of tackling, from the “one step, wrap, two steps, squeeze” to prohibiting the recurrence of the big play.

“Everybody has to do the little things,” Neuheisel said. “There’s plenty of blame to go around. It’s about getting better and getting better fast.”

Looking forward, Neuheisel believes the program will attain the success he has sought after and asserts it starts with the leadership of the team in himself and his coaching staff.

He also acknowledged the frustrations on behalf of UCLA football’s followers and said assurance that all hope is not lost.

“It isn’t as though we haven’t made strides,” Neuheisel said. “Those of us in the trenches have to believe we’re on the right track.”

QUICK HITS: Redshirt freshman cornerback Aaron Hester will return to practice this week. He suffered a fracture in his right fibula in the Bruins’ season opener against San Diego State and has been sidelined ever since. His status for Saturday will be determined by his performance at practice. His position remains open for competition this week between freshman defensive back Sheldon Price and redshirt sophomore cornerback Courtney Viney. Freshman offensive lineman Stanley Hasiak and redshirt senior offensive guard Nick Ekbatani will compete this week for the starting position at right guard.