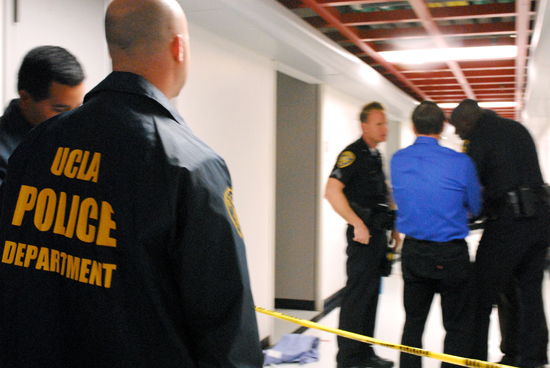 University police and the Los Angeles Police Department work behind yellow tape during the investigation into the stabbing of a UCLA student during Chemistry 30CL.

By Carolyn McGough and Daniel Schonhaut

A 20-year-old female UCLA student who was stabbed multiple times during a chemistry lab on Thursday is being treated at the Ronald Reagan UCLA Medical Center and is expected to recover, police said in a statement.

Damon Thompson, a fourth-year UCLA student, was arrested Thursday for allegedly stabbing the woman, and is being held on suspicion of attempted murder, according to the Los Angeles Police Department.

Charges against Thompson will be filed on Tuesday, police said. Bail has been set at $1 million. Police have released no information about Thompson’s background or medical condition, although he has no prior criminal record.

According to police and witness reports, Thompson stabbed the victim multiple times, including in the neck, during a laboratory class on the sixth floor of Young Hall around 12:20 p.m. Thompson turned himself in to authorities at the front desk on the third floor of the building shortly afterward, and has been so far cooperative with police.

Emergency medical technicians arrived at the scene three minutes after the stabbing and took the victim, whose name has not been released, to the emergency room at the UCLA Medical Center, where she was listed as being in critical condition.

Thirty to 40 students may have witnessed the stabbing occur, police said.

A student, who asked not to be named, was in a nearby lab when the stabbing occurred.

The victim wandered into the hallway of the sixth floor of Young Hall after being stabbed and then was asked by a nearby teaching assistant to sit down in another room, he said.

“She was drenched in blood and the whole lab coat was bleeding, like literally half of the lab coat was red, and the TA was applying pressure to the neck,” the student said. “And me and two other guys were scrambling around looking for gauze and trying to stop the bleeding.”

The student said the victim asked for help, and she said she was feeling faint. She then lost consciousness.

“Her head dropped and started leaking,” he said.

The student, along with other sources at the scene, were interviewed by police for hours after the incident.

According to a statement released by the University, the victim and the suspect worked together in a chemistry lab on campus. The LAPD is currently working with university police to confirm the details of the stabbing. The order of events leading up to the stabbing has not been clarified.

LAPD is working with university police to confirm the details and events leading up to the stabbing. An LAPD detective said that the motive for the stabbing is not known.

The object used in the stabbing has also not been confirmed.

A press conference was held at the medical center around 3 p.m. Thursday following the incident.

“We’re not going to go into a lot of detail because we don’t want to hamper the investigation,” said Lt. Martha Moran, who spoke at the press conference on behalf of LAPD.

Fourth-year microbiology student Saad Ahmed said he was near Young Hall shortly after the attack and that he saw his friend running into the building alongside police.

Ahmed said he followed police into Young Hall and saw the suspect being arrested, at which point he asked his friend what had happened.

His friend was “in disbelief, in shock,” he said.

Ahmed said his friend began talking about a stabbing that had occurred on the sixth floor.

Ahmed then ran to the sixth floor and saw police standing around the victim.

After the attack, counselors were summoned to Young Hall to console any traumatized students. A few students who witnessed the attack were standing in a small group as counselors approached them.

If students wish to speak with counselors, they are available at Counseling and Psychological Services in the John Wooden Center West.

Peter Kassel, the director of training at Counseling and Psychological Services, said students might experience “delayed onset (grief).” He said shocking events may sometimes cause students to feel numb at first, and such a reaction is completely normal. Other physical reactions may include nausea and shaking.

Students may experience several stages of grief, the duration of which may vary from person to person, said Andrew Felder, another psychologist at the scene.

The sixth floor of Young Hall was cordoned off hours after the incident as UCPD and LAPD investigated the crime scene. Chemistry classes continued on other floors of the building.

In a statement, Chancellor Gene Block expressed his best wishes to the victim and her family.

Anyone with information about the stabbing is advised to contact UCPD at 310-825-9371. Students wishing to speak to a counselor can reach the Counseling and Psychological Services Center at 310-825-0768.