Approximately 100 people protest outside the Wilshire Federal Building seven days after the military junta staged a coup and declared martial law in Myanmar. Citizens took to the streets in Myanmar, and members of the Burmese diaspora, including the UCLA Burmese Student Association, demonstrated in solidarity with Myanmar in Los Angeles and in cities across the United States.

Myat Min holds a sign while raising his fist. He said he came to protest for the release of all of the detainees. Min added that he has felt suffering in solidarity since the coup began.

Debbie Lee holds up signs that say, “Shame on you dictator, we’ll never forgive you.”

Lee was born and raised in Myanmar but left the country in 1988, the year of the pro-democracy 8888 Uprising. She attended the protest because she wants democracy for Myanmar, she said.

Protesters dressed in red hold up signs written in red advocating for justice for Myanmar. Red is the color of the National League for Democracy, the ruling political party before the coup d’etat.

Violet raises the three-finger salute, a symbol commonly used by Burmese protesters. Violet declined to provide her last name for fear of political retribution. The gesture has multiple meanings, but for Violet it represents the judiciary, executive and legislative branches of the government.

“We’re here to support the people (protesting) in Burma, because they are totally closed off from the whole outside world,” Violet said. “We wanted to let the whole international community know that we are not with the military. We are against the military government and we want to save our democracy.”

Left to right: Chaw Su Win, Angel Wine and Zaw W Ye hold the flag of the National League for Democracy and the flag of Myanmar, raising their hands in the three-finger salute. Win expressed the constant fear that accompanies living under military control, but stressed she is not afraid as she defends freedom and democracy.

Protesters stand together, raising their signs and flags while displaying the three-finger salute.

Jicky Aung (middle), dressed in a red hoodie and holding up a red sign, said she sees the military trying to gain control over the government through unjust means as a form of bullying. Aung said her parents, who lived through the 1988 uprising, hope the next generation doesn’t have to face a similar situation.

Aung Hein chants with a speaker in an attempt to address the feelings of people in Myanmar after the coup took place.

Despite feeling helpless at first, Hein said he now has faith in the country to overcome the coup.

At 81 years old, Khin Win holds up a sign with a picture of Aung San Suu Kyi.

When asked what she would say to the military right now, Win said, “You are not going to rule our country forever. God is going to punish you because everybody is suffering in my country.”

Sander Win holds up a sign that shows a cross on the military ruler, chanting along with other protesters. Upon hearing the news of the coup, Win said she felt devastated as she already experienced an uprising against the Burmese military dictatorship once in 1988.

Protesters chanted in Burmese, demanding democracy, for Suu Kyi to be freed, for the military to get out of the country and for a successful revolution – according to Vivian Tun, a member of UCLA’s BURSA.

With a microphone, Rosey Aung leads the protesters in singing the revolution song written during the 8888 Uprising, “Kabar Ma Kyay Bu.” She said singing with the crowd reminded her of the emotions she experienced during the protest back in 1988. Aung’s words were translated by her friend Khin Naw.

Protesters gather around a bus stop bench to sign a petition urging increased involvement and action from the U.S. regarding Myanmar.

Alfred Tun, the president of UCLA’s BURSA, said the petition has three main demands: applying international pressure on Myanmar by using targeted sanctions toward the military officials, working together with the U.S.’ partners and the U.N. to collectively pressure the military to respect the wishes of the people and standing in solidarity with the Burmese community who have fought long and hard for their freedom.

Han Nyunt clenches his fist while chanting. Nyunt said Burmese people in the U.S. must stand with the people in Myanmar as they fight for democracy.

Protesters urge the release of Mya Aye, one of the leaders of the veteran pro-democracy group 88 Generation, which protested against junta rule in 1988.

Yamone Phoo, a student at El Camino College, gives a speech at the protest.

“We voted for our leaders, for NLD leaders, so only they would be good for Myanmar,” Phoo said.

“I’m here to support my country and to do as much as I can from here,” said Vivian Tun, a fourth-year cognitive science student at UCLA.

The crowd of demonstrators move toward the front of the Wilshire Federal Building, displaying their signs to the cars on the road.

Protesters gathering at the intersection between Wilshire Boulevard and Veteran Avenue hold a flag with Suu Kyi’s portrait as a show of solidarity with their civilian leader. Passing cars honked in support of the protest. 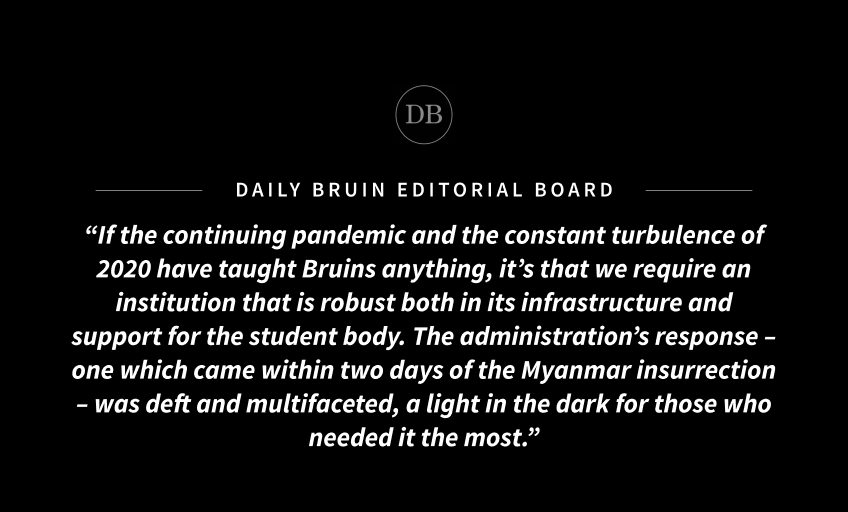