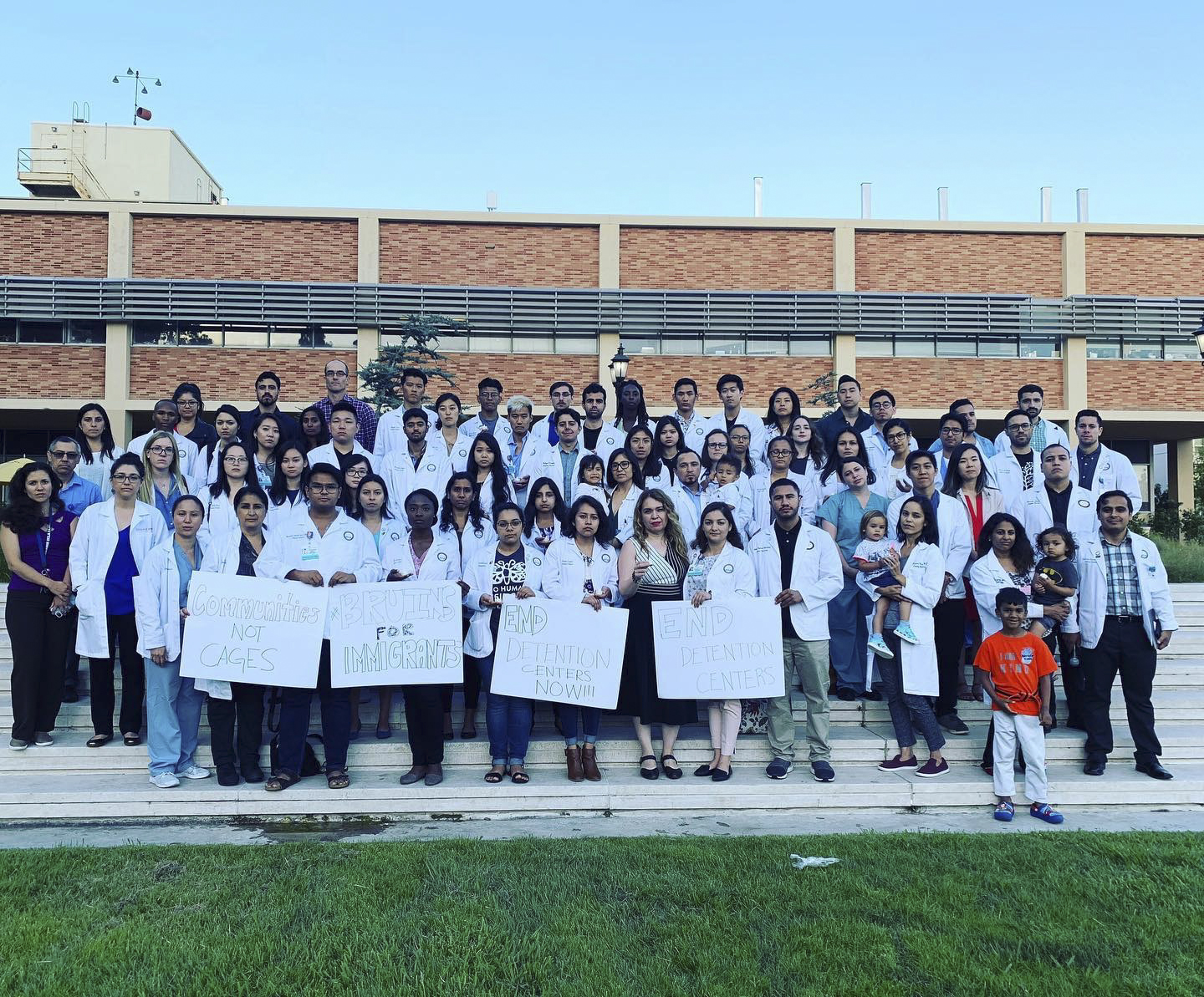 Student groups UndocuMed Students and Allies at UCLA and Immigrant Youth Task Force at UCLA held a vigil last week to call attention to inhumane conditions at U.S. Immigration and Customs Enforcement immigrant detention centers on the U.S.-Mexico border. Speakers discussed their personal experiences and what they saw when they visited the centers. (Courtesy of UndocuMed Students and Allies at UCLA)

Lisa Gantz spent a month during her medical training working at a legal clinic along the Texas-Mexico border, and visited several detention centers in the area. She said she is still haunted by what she saw.

“One of the ones that I visited was basically an old Walmart where they had ripped out all of the inside, and then there were just these rows and rows of bunk beds underneath fluorescent lights,” Gantz said.

Gantz, a pediatrician at the David Geffen School of Medicine, was one of several volunteers who helped to organize a vigil held July 12 at UCLA that protested the living conditions of undocumented immigrants in detention camps.

The vigil was hosted jointly by the Immigrant Youth Task Force at UCLA and UndocuMed Students and Allies at UCLA, both student groups that support undocumented and immigrant students at UCLA and in the Los Angeles area.

Detention centers have been reported by the Huffington Post to have inhumane conditions, in which detainees face physical abuse from guards and do not have sanitary drinking water. At least seven children have died in the past year while being detained.

To raise awareness about the conditions, organizers said they invited physicians from UCLA, who had visited detention centers, to speak.

Gantz said she visited detention centers where she saw children being severely mistreated.

“I met so many kids who were scared, alone; they only spent an hour a day outside,” she said. “They only had two phone calls per week.”

Gantz once met a 4-year-old boy who had spent three months traveling on foot with a relative from Central America to escape the violence in his home country, only to be detained at the border.

“Hearing a small child, a preschooler, talk about the violence that he had experienced, it just made it so clear to me that these children are not emigrating: They’re fleeing and they’re fleeing potentially deadly circumstances and violence in their home countries,” Gantz said. “They come here looking for our help, and putting them in these inhumane and unsafe centers is just horrifying to me.”

One of the speakers talked about her own mother’s deportation, while another discussed her grandparents’ experience being sent to a Japanese concentration camp in the United States during World War II, Gantz said.

Gantz said she believes students who attended the vigil were moved by the speakers’ stories and interested in learning what they could do to make a difference.

Mayra Lucas Ramirez and Yadira Bribiesca Leon, medical students and members of UndocuMed, said they hope the vigil inspired people to pay more attention to the issue of detention camps.

“I feel like sometimes events like these happen and raise awareness for a little bit and everyone cares for a little while, then they forget about it,” Lucas Ramirez said. “At the end of the day, nothing was resolved and these children are still in detention camps.”

Hearing about the conditions at detention centers from those who have actually experienced them allows for a greater degree of empathy and understanding than secondhand accounts do, Bribiesca Leon said.

“I feel that we might hear this stuff in the news or read the newspaper, but not until someone who’s lived it speaks about it, then we feel how real it is,” Bribiesca Leon said.

Several attendees at the vigil brought their children to stand in solidarity, Gantz said.

“To include them in that conversation and that greater conversation about how we can do better for all children, regardless of what country they were born in, was really inspirational,” Gantz said.

UndocuMed hopes to host an immigrant health awareness week at UCLA in November, as well as a panel of undocumented students to speak about their experiences.

Gantz said she believes it is important to dispel any misconceptions people have about detention camp conditions in order to raise awareness of the problem.

“I think that a lot of us have seen these stories and seen photographs and heard testimonials … (but) people are almost denying that it’s occurring or denying that it’s happening on the scale that it is,” Gantz said. “I think it’s really important that we force people to confront this ugly truth and realize the damage that we’re doing.”