UC fails to listen to unions despite strikes, allegations of unfair labor practices 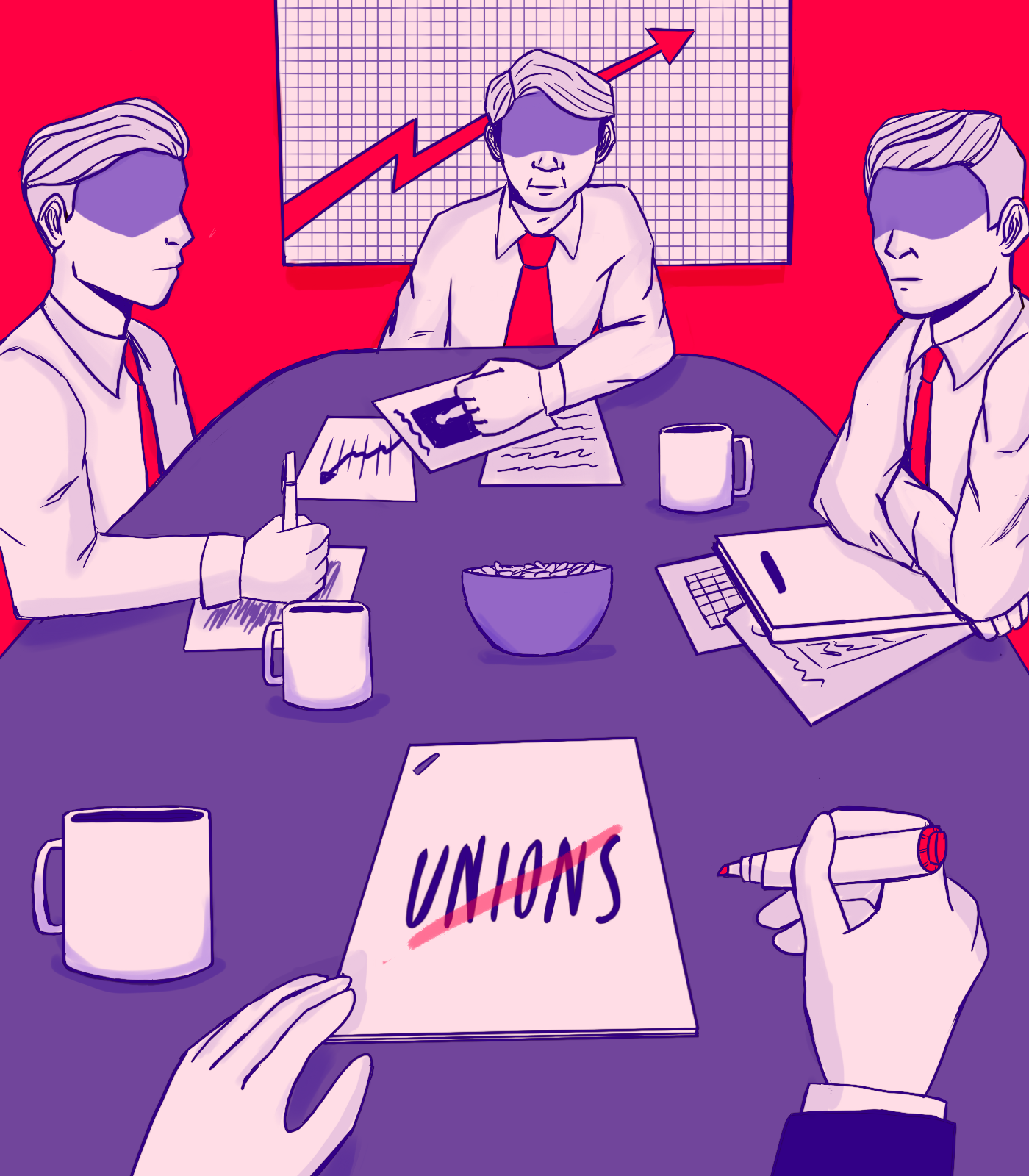 Here at UCLA, you’re a part of one big family – that is, unless you also belong to a labor union.

Union strikes have become a regular occurrence on campus. Most recently, the American Federation of State, County and Municipal Employees Local 3299 joined the University Professional and Technical Employees-Communications Workers of America in a strike March 20 to advocate for increased wages and to stop the outsourcing of contract work.

The strike had visible impacts on students caught in the middle of an ever-hectic finals week. Dining services on the Hill were limited, as many of its workers picketed in Bruin Plaza, clamoring for the attention of sleep-deprived students on their way to their exams.

This is just the latest in a series of strikes by AFSCME Local 3299 dating back to early 2018, in which strikers advocated for ending race- and gender-based discrimination in hiring and wage practices. The union held three-day strikes in May and October to bring these issues to light.

Despite all this, March’s strike did little to persuade the University of California to reenter wage and benefit negotiations. It did, however, lead to AFSCME filing charges against the UC for allegedly using illegal intimidation tactics on striking workers. The charges cite incidents where the University warned of possible workplace retaliation, along with University police threatening citations and condoning physical assault on workers along the picket line.

It’s one thing not to negotiate with your employees. It’s another thing to threaten them.

This is a drastic shift in the UC’s attitude toward its unions. Relying on methods of intimidation that serve to antagonize striking workers only breeds an atmosphere of toxicity. These actions, if proven, would make it clear the University has contempt for its union-backed workers, and it is evident their repeated attempts at striking won’t change its unwillingness to negotiate their demands.

AFSCME Local 3299 announced Friday that another strike will be held April 10 in response to the UC’s alleged intimidation. Striking is realistically the only option unions have to voice their concerns.

John de los Angeles, an AFSCME 3299 spokesperson, said the union has received enough complaints from workers who participated in the March 20 strike to warrant filing unfair labor charges against the UC and planning another strike.

“Previous strikes were about the trends of the UC’s business practices affecting our workers, but this upcoming strike is more concerned with the fundamentals – whether or not our workers are able to have a voice when they protest,” de los Angeles said.

Evidently, the University doesn’t seem interested in hearing what union workers have to say, despite their repeated demonstrations. Playing these strikes off as a waste of time highlights the UC’s degrading view of its workers, and ultimately, the individuals those workers serve.

This ongoing back-and-forth between both parties serves as a marker of instability at a distinguished university system – it is a problem that has become obvious to students, employees and others involved in everyday campus activities.

Claire Doan, a UC Office of the President spokesperson, said in a statement that AFSCME’s unfair labor charge lacks merit and is a transparent attempt to justify another strike.

“This will be the fourth systemwide strike in less than a year – it’s abundantly clear union leaders have little regard for the negative impact on the patients, students and communities that UC serves,” Doan said.

But the purpose of these ongoing strikes is to underscore the importance of their work and involvement in the UC community. All the strikers are hoping for are wages that reflect the value their work offers to the people they serve. It’s not as if they realistically have any other option to make these concerns known.

Ironically, it’s the UC that doesn’t seem to care about the communities it serves. The University’s attempts to outsource contract jobs to cut costs is a detriment to the inclusive community values it continues to preach. Administrators have made it clear they don’t care for the patients, students and communities they serve by neglecting the demands of the very employees who serve those stakeholders.

And if substantiated, the unfair labor allegations against the UC would show it completely gave up on trying to play ball with unions, tried retaliating instead and wasn’t even willing to negotiate in a performative sense.

Of course, it may seem unreasonable to hope for the UC to work toward satisfying the unions’ demands for wage increases in a manner that pleases everyone. But resorting to intimidating strikers only sets negotiations back further and lowers both parties’ abilities to reach a middle ground. Antagonizing the individuals whose work has helped shape the University’s gleaming, forward-thinking identity cannot be the answer.

And there’s no denying it: Violence is the tactic of “1984”-esque authoritative regimes. It doesn’t have a place in higher education institutions that claim to uplift people.

When these employees strike, all they are asking for is a seat at the family dinner table. The UC doesn’t even seem willing to give them that.