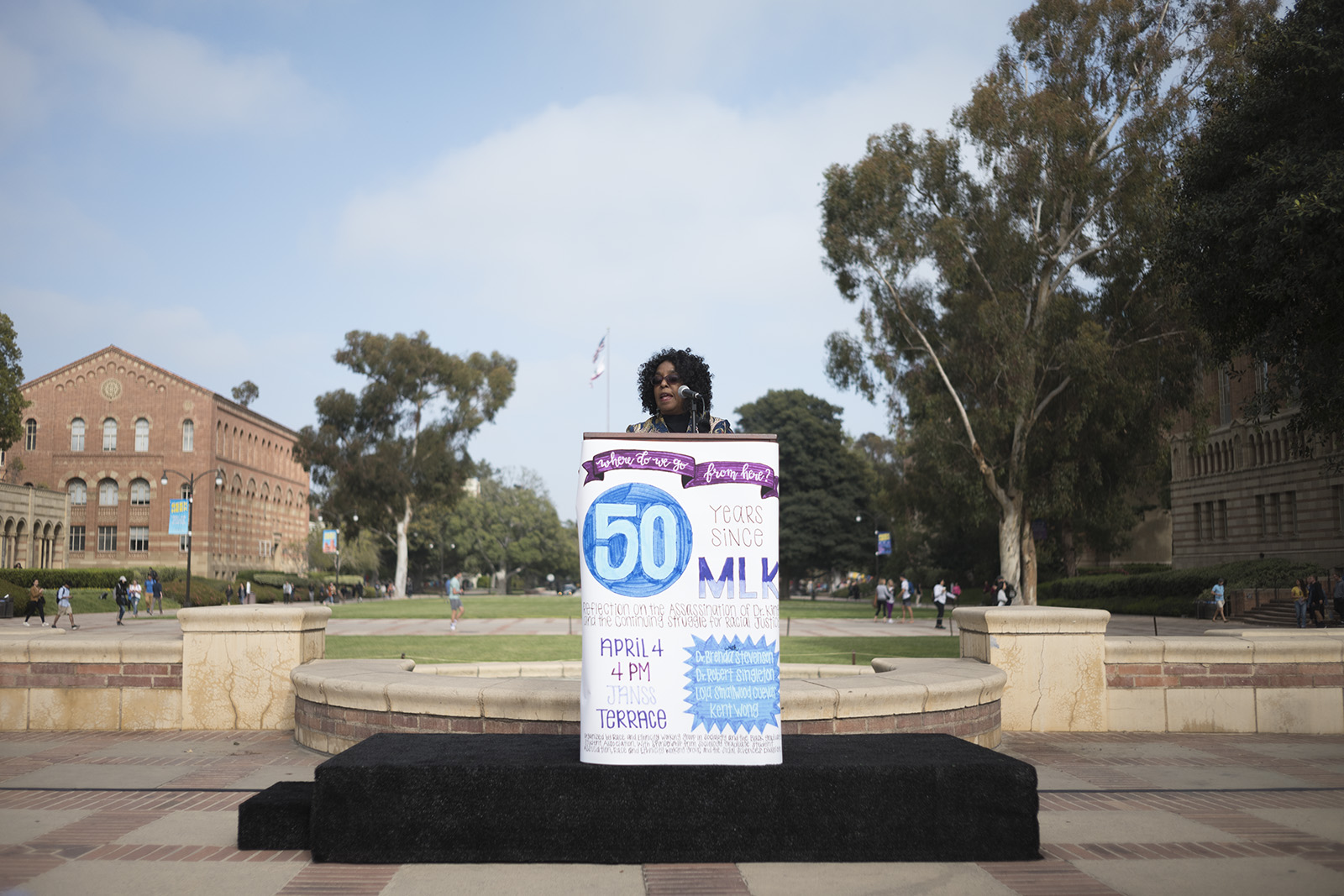 Brenda Stevenson, a history professor at UCLA, spoke about encountering racial discrimination in the segregated South during her childhood at an event commemorating the 50th anniversary of Martin Luther King Jr.’s assassination. (Quanzhao “Ari” He/Daily Bruin)

“I remember the burning crosses. I remember being spat on by white boys entering the movie theater while the coloreds were leaving,” said Stevenson, a UCLA history professor. “That’s what it said on my birth certificate – that I was colored.”

Other speakers at the event talked about their personal experiences with racial, gender or labor discrimination and ways to combat hate. The event was held by several groups, including the Black Graduate Student Association, the Afrikan Student Union and the Community Programs Office.

Christian Green, president of the Black Graduate Student Association at UCLA, said the event was meant to inspire the UCLA community and inform people about King’s legacy.

“We hope to bring awareness around the assassination to all ages and demographics.” he said.

Stevenson said at the event that African-Americans continue to face economic disparities today. For example, a 2014 study showed that women of color earn on average 64.6 percent of what white men do, while eight out of 10 African-American mothers are the breadwinners of their households.

Lola Smallwood Cuevas, a project director at the UCLA Labor Center, said she hoped that UCLA as an institution will do more to address racial, gender and class disparities. For example, she said she is proposing a research program to study African-American labor at UCLA that, if approved, is scheduled start in the fall.

“The campus has so much to bring to the communities in need,” Cuevas said. “Often, decisions are made by people who have no experience with being black or being in poverty – my hope is that the administration would prioritize these issues and do more.”

Dominique Rocker, a co-host of the event and a graduate student in African-American studies, said that one of the goals of the event was to emphasize that improving racial inequality is a continuing process.

“I hope that people recognize that King’s work is not complete,” she said.

Rocker wore a shirt that said “Assata Is Welcome Here,” a reference to Assata Shakur, a member of the Black Liberation Army and a prominent female figure in the civil rights movement. Rocker said she wore the shirt to show that King was not the only leader of the civil rights movement, and that other African-American activists should also be remembered and celebrated.

“Dr. King’s legacy is not the only legacy of the movement,” Rocker said.

Debanjan Roychoudhury, a doctoral student in sociology and one of the organizers of the event, said he hopes students were empowered by the speakers and King’s legacy.

“I hope that young people specifically gain insight and inspiration,” he said. “When we listen to our elders and those who come before us, we realize that we are not alone in our struggles.”

Roychoudhury said he hopes the event’s ideas spur further progress for not only racial justice, but also gender equality and class issues.

“Fifty years later, some of the things MLK said still ring true,” he said. “I hope that the conversation about these issues doesn’t stop today, but that it starts today.”