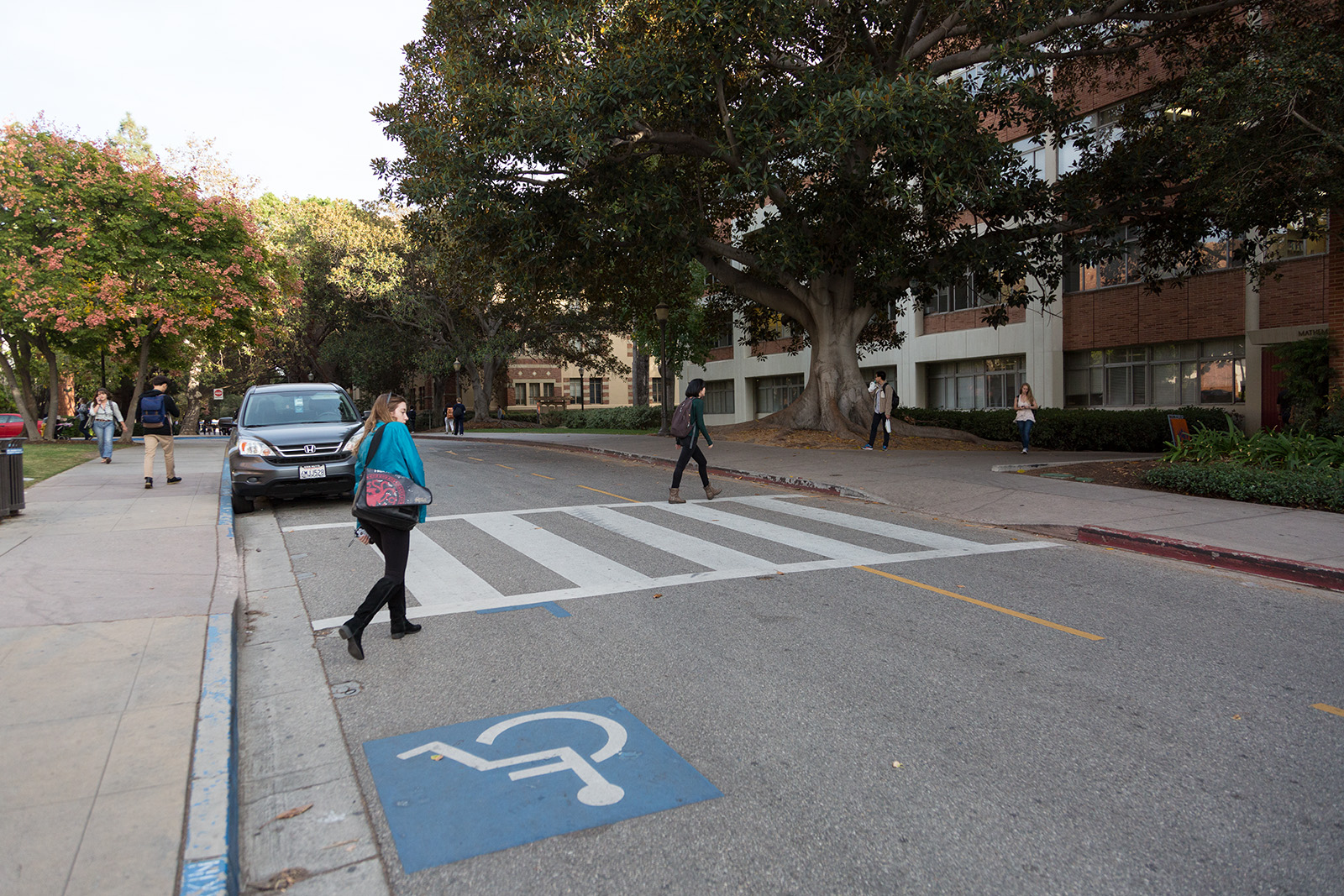 UCLA Transportation recently lowered the campus speed limit for vehicles to 20 miles per hour and has placed flags across campus to ensure motorists are aware of the change. It should also run a similar campaign to raise safety awareness among cyclists and pedestrians. (Amy Dixon/Assistant Photo editor)

I almost witnessed a death on my walk to class one morning in the spring.

A student riding a skateboard was zipping down De Neve Drive through the middle of the empty road rather than on the designated bike lane. Meanwhile, a sedan entered the roadway and began speeding up the incline toward the student.

Fortunately, the student diverted his path just quickly enough to squeak by the car and remain unharmed.

Road safety clearly isn’t something we should take lightly. In September, UCLA Transportation lowered the speed limit on campus from 25 miles per hour to 20 miles per hour to make campus roads safer for pedestrians and bicyclists. As part of its “20 is Plenty” campaign, UCLA has installed flags on streetlights across campus to remind motorists to abide by the lower speed limit.

Limiting vehicle speeds on the Hill is a smart decision, but it’s not enough to completely ensure pedestrians and cyclists are safe. After all, focusing solely on motorists is ignoring the other half of road safety – those that use the campus roads without cars.

UCLA Transportation should work with university police to organize awareness campaigns for pedestrians and cyclists to help them be more vigilant about road safety. UCLA can place flags and signs around campus reminding students to obey pedestrian and cyclist traffic laws and can hold workshops on campus and on the Hill to promote better road safety practices.

By making awareness a key priority for both motorists and pedestrians, the transportation department can help make the campus roadways safer for everyone.

Some students have a cavalier attitude about their safety. Bruins sometimes use crosswalks out of turn or cross the road without first ensuring that approaching cars are actually stopping. Cyclists sometimes ride outside of the designated bike lanes directly into the oncoming traffic. These kinds of practices increase the likelihood of pedestrians or bikers colliding with vehicles.

The UCLA Police Department has dealt with these problems too. Students frequently use the crosswalk in front of Parking Structure 7 out of turn, causing traffic congestion, said Richard Davis, UCLA Police Department lieutenant. As a result, UCPD had to send out officers to specifically monitor the spot earlier this quarter.

“Many times, students jaywalk on the crosswalk leading to Bruin Walk, which I believe is very dangerous,” Gosala said. “Students often cross the road even though a car is quickly approaching.”

There are serious repercussions for these kinds of actions. Aside from the risk to their own lives, students acting dangerously on the road can put motorists and fellow pedestrians at risk. Around 7,000 people died in California in pedestrian-related traffic incidents between 2006 and 2015 – a number the California Office of Traffic Safety says is reaching “crisis proportions.”

UCLA certainly doesn’t have thousands of accidents each year, but pedestrian and cyclist safety should not be taken lightly.

UCLA can alleviate the problem, for example, by placing flags on the streetlights near the crosswalks in front of Dodd Hall to remind students to make sure the road is clear before crossing. UCLA Transportation can also partner with UCPD and UCLA Residential Life personnel to incorporate talks about the best road safety practices into existing events on the Hill – such as residential student government events or floor meetings. And UCLA can send out bimonthly emails referencing statistics listing the dangers of breaking state pedestrian laws. Students are more likely to follow the rules if they receive frequent reminders, and awareness campaigns are the way to efficiently dispatch these.

In other words, cracking down on law enforcement doesn’t have to be the only way to ensure safety.

“A more passive reminder and statistical information of accidents may be more helpful,” said Nick Pantoja, a second-year physiological science student. “I do believe that road safety is an issue that (students) do not think too much about.”

Kensharra Davis, a second-year English and political science student, said she does not often think about road safety when traveling about campus. But she added she thinks an awareness campaign about road safety would be effective because it would force her and other students to consider their safety while using campus roads.

It’s easy to argue UCLA can raise awareness about road safety simply by having UCPD crack down on traffic law violations. But, as Lt. Davis stated, UCPD cannot increase enforcement of traffic laws on campus without hiring more officers. Besides, clamping down on rule violations is not the best solution; more strict enforcement of traffic rules would likely frustrate students, as they would be forced to submit to the laws rather than learn the laws’ importance and voluntarily follow them.

And while UCPD officers can occasionally patrol the campus for infractions, much like they already do for Parking Structure 7, UCLA Transportation cannot rely on UCPD alone to promote pedestrian road safety.

“We just don’t have the personnel,” Davis said, “(Officers) enforce (traffic laws) as often as (they’re) able to … but they also have to answer radio calls and do that as well.”

An awareness campaign, however, is much more feasible to coordinate and conduct. Reminding students to be cognizant of traffic rules both on foot and on bike with signage, programming and informative emails could improve safety across campus.

Perhaps then, that skateboarder from months ago would not have needed good fortune to survive the day. After all, the next student may not be so lucky.