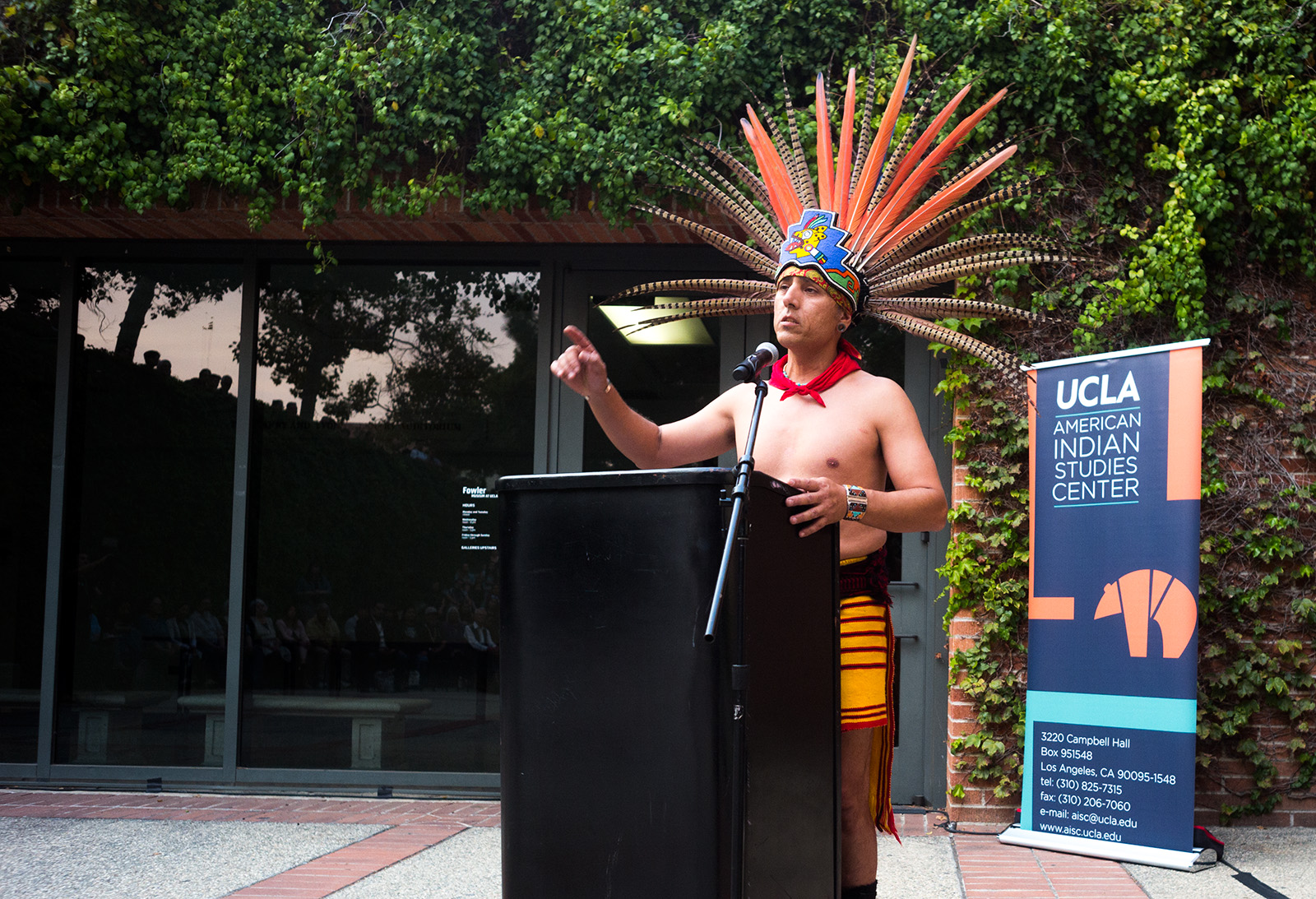 A tribal elder of the Fernandeño Tataviam Band of Mission Indians burned sage in the air as the chair of the Los Angeles City and County Indian Commission gave a blessing to all those present at an Indigenous Peoples Day celebration Monday.

The event, which was hosted by the UCLA American Indian Studies Center at the Fowler Museum, celebrated the Los Angeles City Council’s decision in August to replace Columbus Day with Indigenous Peoples Day.

Los Angeles City Council members and representatives from the city and county American Indian commission spoke at the event, which also featured performances by indigenous singers, dancers and drummers.

Mitch O’Farrell, the councilmember who spearheaded the campaign to pass the measure, thanked individuals and organizations who helped lobby for the change. O’Farrell, a member of the Wyandotte Nation, said he hopes the rest of the country will follow Los Angeles’ decision to create Indigenous Peoples Day.

“Here’s what happens when LA takes action: The rest of the country listens,” he said. “We will inevitably effectuate change across this country … erase Columbus Day as a federal holiday and replace it with Indigenous Peoples Day across the United States.”

Shannon Speed, AISC director and an associate professor in the departments of anthropology and gender studies, said many individuals at the event worked on the campaign to replace Columbus Day with Indigenous Peoples Day.

“It was really a great thing for all of us to be able to come together, to celebrate this victory,” she said. “It really was a great first celebration, and I think it was a great honor to be able to host it at UCLA.”

Speed, a member of the Chickasaw Nation, added she hopes AISC continues to celebrate the holiday on campus.

Students present at the event said they liked this first celebration of Indigenous Peoples Day because they think it represents a victory for indigenous communities.

“I really hate Columbus,” she said. “I think it’s really important to embrace the indigenous communities and what they’ve done for the world and also just respecting that they still exist now.”

Renee White Eyes, a graduate student in education who is of indigenous descent, said she was present when the city council passed the measure renaming Columbus Day. She said she thinks the move brings to light the historical oppression of indigenous communities.

“It’s a big step in terms of acknowledging what Columbus has done historically, just the slavery, the rape … all the historical trauma that has come with that,” she said. “(This) is just one step in acknowledging the indigenous peoples … and moving forward in a positive light, and hopefully this is just the beginning of more to come.”

Jaime Vela, a graduate student in anthropology of Apache heritage, said he thinks the change recognized historical genocide and oppression of indigenous peoples.

“They were trying to erase us from history, but now they’re actually recognizing that we do exist,” he said. “We’re not gone – we’re still here, so our culture’s still alive.”