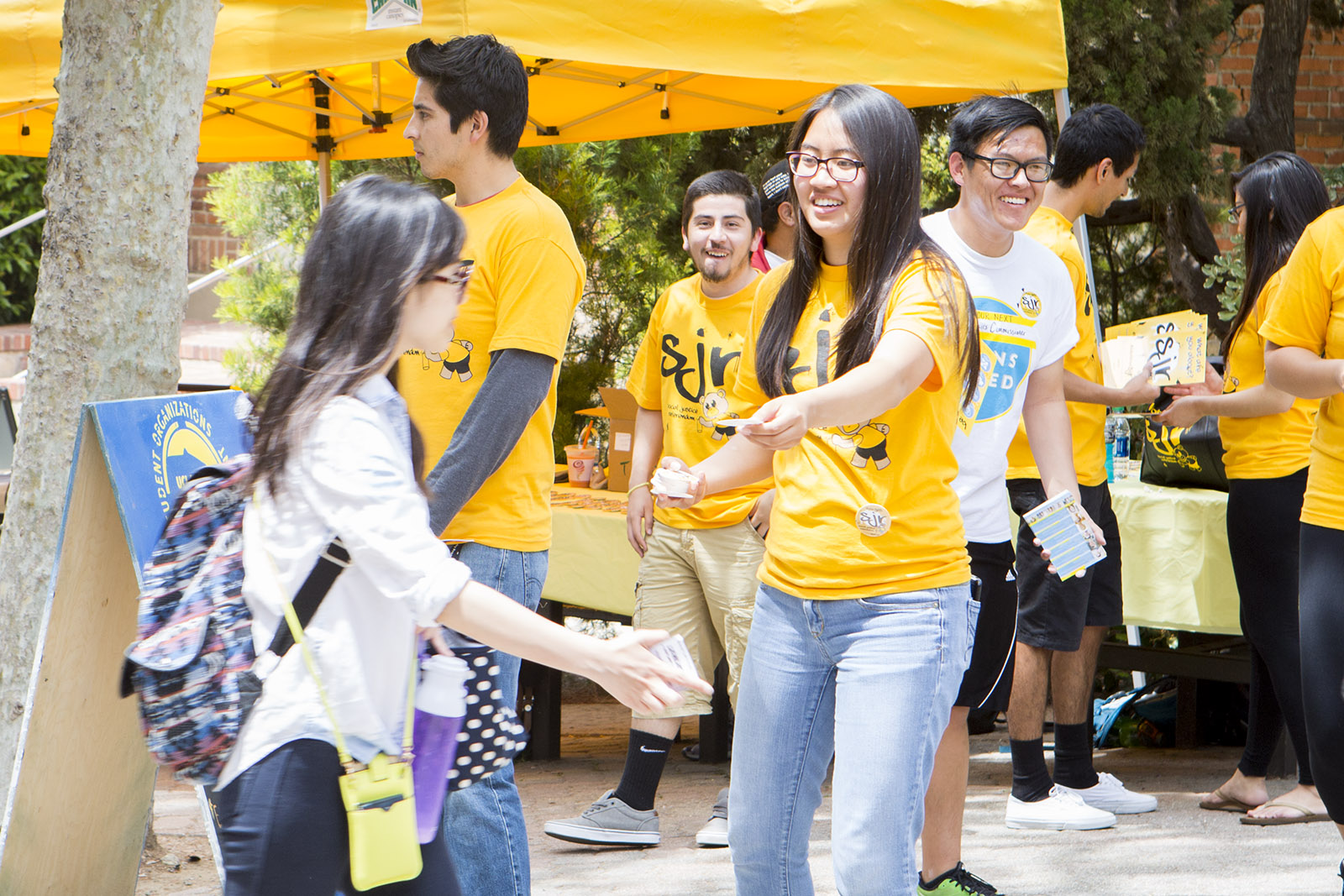 The Social Justice Referendum of 2016 continued campaigning Tuesday after an all-day sanction was suspended by the USAC Judicial Board. While the referendum’s campaign claimed the sanction was unfair, its disregard for the electionwide rules it previously agreed to follow threatens student democracy in the future. (Jintak Han/Daily Bruin)

It didn’t take long for the student government election to spiral out of control.

Before voting even began, it came to light that the Social Justice Referendum campaign had outspent the agreed-upon campaign finance limit nearly tenfold.

The referendum reported that it spent upward of $7,400, far more than the $750 limit for ballot measures, and didn’t disclose the source of about 3,400 of those dollars until after two full days of voting had been completed. When the USAC Election Board initially handed down the six-hour on-campus campaigning ban – which was already woefully weak considering the magnitude of the offense – and called for the campaign to reveal its funding sources, the referendum refused to do so in time.

The result was a full-day campaigning ban, which was subsequently suspended pending a petition against the first sanction to the USAC Judicial Board. Social Justice Referendum representative Jazz Kiang, USAC Academic Affairs Commissioner Trent Kajikawa and President Heather Rosen – who voted in favor of instituting spending caps last year but has apparently since changed her tune – filed the petition, claiming the restrictions were unfair to all referenda. In the meantime, as the end of the voting period looms nearer, referendum supporters are able to continue campaigning.

Not only has the campaign violated election regulations, it’s torn them to shreds with near impunity, even though Article IX of the election code states that violation of campaign finance rules can lead to disqualification.

The election board’s lax enforcement of the election code that is allowing the Social Justice Referendum to run rampant has dire implications for student democracy. If future slates, candidates or referendum campaigns are able to spend nearly 10 times the spending limit without any significant action to restore democratic conditions, we can kiss the possibility of equity goodbye.

Although referenda, absent a concerted effort to oppose them, don’t run the same kind of campaigns candidates do, the election board is setting a dangerous precedent. Its unwillingness to take meaningful action communicates to the student body that spending obscene amounts of money without naming its sources in a timely manner will result in a slap on the wrist at worst.

It’s no secret that high spending caps are biased against candidates who don’t have access to large monetary reserves. There’s a decent spending limit already in place at UCLA, but, since it isn’t adequately enforced, our election code similarly allows space for potential discrimination against low-income students – or at least students without access to capital – who may want to run for office. The cap loses its effectiveness as a democratic tool when the limit isn’t properly policed. Not everyone has $7,400 to throw around for a student government campaign.

Under a weakly enforced finance system, a proper shot at victory is reserved for the privileged few. Should students without access to large sums of cash attempt to run in a contested race against a well-funded slate or candidate who can disobey the rules without meaningful repercussions, wealth becomes a determining factor in election outcomes. As such, affluent campaigns have the advantage of outspending their opponents into submission.

In the Social Justice Referendum’s case, the people claiming to champion low-income students of color are setting a precedent that could damage these same communities’ future chances to gain proper representation in student institutions unless they get their hands on substantial amounts of money. Shrouding the campaign in the language of social democracy doesn’t change the fact that its practices promote plutocracy. Referendum supporters may have a case for more appropriate spending limits for ballot measures – though in any case they certainly shouldn’t exceed $7,400 – but to bring it up during an election period and not ahead of time comes across as a deceitful political maneuver.

Even if the campaign were suspended until the end of the voting period, assuming they’d actually obey such a sanction, the organizers have already plastered the referendum’s name all over campus due to their enormously disproportionate spending. In the process, they’ve revealed the election board’s reticence to defend the one thing it’s meant to defend: the democratic process.

It makes little difference that referendum representatives claim their obscene overspending was a product of their interpretation of the election code that ostensibly allows them to spend $750 for each of the eleven line items in the measure, especially considering that they had to agree on the $750 cap for the entire referendum before campaigning began. It’s too late for the damage to be undone.

The election board needed to decide if elected positions and campaigns are for everyone or exclusively for the well-financed. By allowing the Social Justice Referendum to walk all over it, the board has betrayed its principles. And low-income students might be the ones left to pay the price.