City council to vote on L.A. Mobility Plan after Fix the City lawsuit 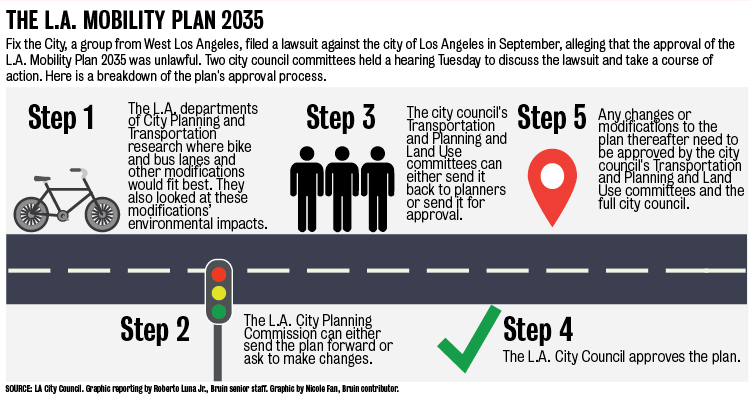 The Los Angeles City Council will decide whether to revert the L.A. Mobility Plan 2035 it adopted in August to a previous version in response to a community group’s lawsuit.

The plan is a guide for city officials and agencies on transportation-related issues for the next 20 years, with objectives including painting about 300 miles of bike lanes and about 240 miles of bus-only lanes.

The city council initially approved the plan to increase commuters’ options and improve safety for cyclists and pedestrians, concluding that the plan’s benefits outweighed the disadvantages detailed in the city’s environmental report. The report predicted increased traffic and emergency response times.

Fix the City, a West Los Angeles community group, filed the lawsuit claiming that the council’s environmental impact reports didn’t sufficiently analyze the potential effects of increased congestion, such as an increase in greenhouse gas emissions. In addition, the group charged that the amendments of L.A. Mobility Plan 2035 disregarded necessary procedures, including public input and other city officials’ oversight. These procedures are mandated within the Los Angeles city charter and some state planning laws.

The council’s Transportation and Planning and Land Use committees met Tuesday to hear more than 50 residents’ input about the plan, with about half in favor and half against. Some argued the plan lacks public outreach and will increase traffic, while supporters said the plan will create more sustainable transportation options and increase safety.

The council’s Planning and Land Use Committee ultimately recommended that the full council revert the plan and bring amendments, both those passed and proposed, to the Los Angeles Planning Commission. These amendments include making safety a priority in the plan, garnering more community input before implementation, and giving the city council a role in the plan’s execution.

Michael LoGrande, director of the Planning Commission, said these three amendments will be added by December. Other amendments, including one that would remove a protected bike lane on Westwood Boulevard from the plan, need to be reviewed more thoroughly before they reach the city council for approval.

Laura Lake, a member of the Westwood Community Council and Fix the City, said the group has reopened the lawsuit because the committees failed to follow all of their suggestions. Lake said she thinks the city should revise the plan and consult neighborhood councils and community groups before bringing it back to the Planning Commission.

Sandy Brown, president of the Holmby Westwood Property Owners Association, said in a public comment at the meeting that less than two weeks notice was given about the meeting and that the Westwood Neighborhood Council was not able to discuss the issue.

UCLA officials, on the other hand, support the plan because 75 percent of commuting students use sustainable modes of transportation.

Madeline Brozen, assistant director for the UCLA Lewis Center for Regional Policy Studies and the Institute of Transportation Studies, served on the plan’s Technical Advisory Committee and said she thinks the plan’s opponents represent the interests of a privileged, select few and not the larger L.A. community.

She said she thinks the Mobility Plan seeks to serve the great number of people in Los Angeles who either don’t drive or would prefer alternatives.

Brozen said she thinks public input is more important in the future, when the policy’s details are being decided, instead of during its formation.

However, Zev Yaroslavsky, a fellow in the history department at the UCLA Luskin School of Public Affairs and a former city council member, said he thinks the plan was rushed through the political process without much analysis or regard toward potential problems and different neighborhoods’ needs.

Yaroslavsky said he thinks it would be better if the council established different plans for different neighborhoods because city policy cannot hold congested streets to the same standards as streets with free-flowing traffic.

“The Mobility Plan appears to be a one-size-fits-all plan,” he added. “It’s not clear why they posed this plan that applies the same standards to the corner of Wilshire and Westwood to a street in Highland Park.”

Eric Bruins, planning and policy director for the Los Angeles County Bicycle Coalition, said at the meeting that residents should view the plan as how bicycles can be better adapted to current traffic situations, rather than just adding bike lanes.

“This is not a bike plan,” he said. “This is a plan about how bikes fit with the system.”

The City Council is expected to vote on rescinding the plan and adopting the earlier version later this month.