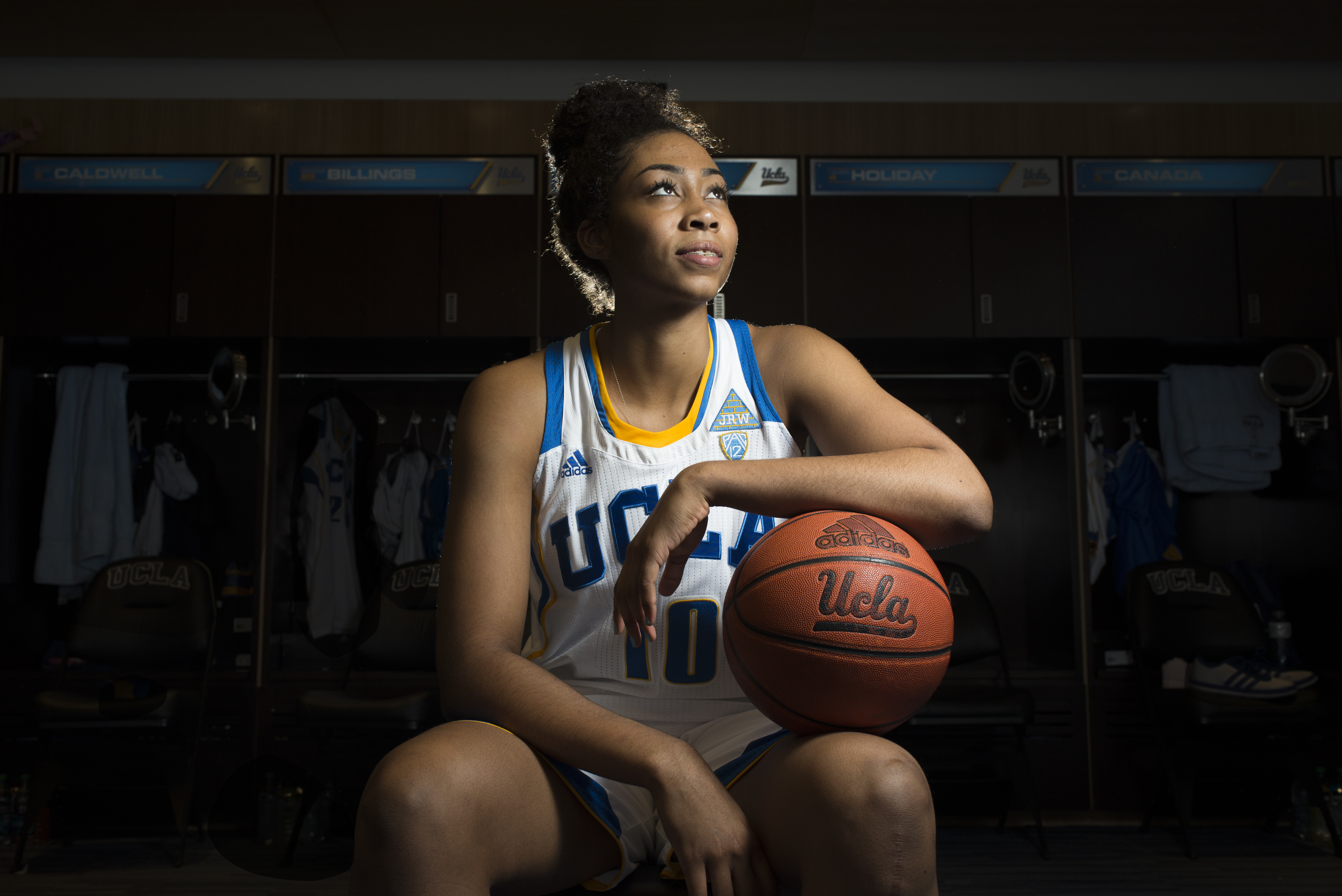 Redshirt junior forward Kacy Swain’s physical burden goes beyond the sweat beading down her forehead and the weight of exhausted legs still trudging deep into the second half. Type 1 diabetes forced Swain to alter her lifestyle in high school in order to keep playing basketball. (Erin Ng/Daily Bruin senior staff)

The original version of this article contained information that was inaccurate. Genetics could contribute to Type 1 diabetes, but genetics does not exclusively cause Type 1 diabetes.

Irritability, extreme thirst, frequent trips to the bathroom and unprecedented weight loss – these were the signs that prompted Kacy Swain’s father, George Swain, to make a trip to the pharmacy and buy a blood sugar testing kit one spring day in 2011.

He pricked his daughter’s finger. When they saw the results, they knew something was wrong.

Her blood sugar level was so high, George Swain said they didn’t even get a reading at first. When they did get a reading, Kacy Swain said it was at 500-600 marks above the normal level. Her aunt, a nurse, said she needed to go to the hospital.

Seeing Kacy Swain power up and down the court, yelling to her teammates, clawing for rebounds, or driving for a layup, someone who does not know her story would not realize that her physical burden goes beyond the sweat beading down her forehead and the weight of exhausted legs still trudging deep into the second half.

Swain, a redshirt junior forward on the women’s basketball team, is back to playing every day after missing all of last season with a torn right ACL.

Knee healthy, Kacy Swain has not been timid around the glass and gained more playing time as the season progressed, establishing herself as someone who coach Cori Close considers to be integral to the team.

That day, the high school junior was diagnosed with Type 1 diabetes, which is the inability of the pancreas to produce any or enough insulin, allowing glucose to enter the bloodstream and raise blood sugar levels. Type 1 diabetes can be inherited genetically.

“It was just really shocking,” Kacy Swain said. “Those five days (in the hospital) went by super fast because I didn’t realize what was happening, it was weird.”

The diagnosis ushered in a period of confusion and worry for her parents, because they did not know of anyone in their families that had diabetes. Leigh Swain, Kacy Swain’s mother, said her biggest fear was that of the unknown.

“We didn’t know how it was going to affect her school work, her sports, her general quality of life, so it was very scary,” Leigh Swain said.

Kacy Swain did not skip a beat. Her father said she took it better than he did. After leaving the hospital, she got right back on the basketball court.

However, making the necessary lifestyle changes didn’t come as easily to Kacy Swain.

“The biggest struggle was really changing and altering her lifestyle in respect to eating and food choice,” George Swain said.

Soon after, Kacy Swain was thrust into the UCLA dorms, onto Nell and John Wooden court, and into the classroom. Kacy Swain and her parents said learning to juggle all the aspects of college life and Division I basketball were especially difficult for her.

“When I came to college, I guess it didn’t really sink in, I guess I was in denial,” Swain said. “(I thought) ‘Yes I have diabetes, but I can still do whatever.’”

With that mindset, Swain fell victim to her condition. She said her performance on the court suffered during her freshman year, as she said played games with her blood sugar hovering between 200 and 300 mg/dl of glucose in the bloodstream.

However, Swain said she progressively matured and learned to say no to foods that were appealing but spiked her blood sugar.

“She had to learn lots of self-discipline but the basketball taught her that as well,” Leigh Swain said.

Close supported Kacy Swain when she learned her recruit had diabetes and now is able to witness firsthand her transformation. Swain said the whole coaching staff and athletic trainer Lisa Friesen have been amazing in helping her grow.

“(Close) has been extremely patient with me,” Swain said. “She has never let me give in to the fact that I have to do way more than a normal athlete.”

It’s a balancing act, Kacy Swain said. On game days, she wears an insulin pump throughout the whole day until game time when she takes off the pump and gives herself a shot of long-acting insulin that lasts the whole game. During timeouts and game breaks, she checks her insulin level to see if it is trending higher or lower. If it is higher, she gives herself more insulin at the half and if it is lower, she’ll eat a power bar.

Swain said she has more energy and her finesse and focus on the court has strengthened as a result.

She also said her knee is no longer an issue because of the success of her recovery.

“My knee is the last of my worries when I play,” Swain said.

Revived and improved, Swain is seeing more and more time on the court at tipoff since posting seven points and seven rebounds against Colorado Jan. 11. She trails senior forward/center Corinne Costa for the team lead in rebounds by only two during Pac-12 conference play. In Pac-12 play, she is averaging 5.3 rebounds per game compared to her average of three rebounds per game in non-conference play.

Now off campus, Swain is cooking and keeping track of her carbohydrate consumption, all while monitoring and administering insulin on her own.

“I’ve enjoyed not only her having her own self-discipline but her also starting to have a vision for others and gaining a dream,” Close said.

For Swain, that vision is writing a cookbook for diabetic athletes.

When she was first diagnosed, Swain said she struggled to find cookbooks and meal guides for diabetic athletes, especially women basketball players. She said that it would have been more helpful to have a guide of foods that help performance and contain meals that she enjoys so she didn’t have to be confined to the same set of meals every day.

George Swain, the man who fostered his daughter’s skill in basketball, echoed his wife.

“If someone has to have Type 1 diabetes, Kacy is the right one because she’s an incredible person and very strong-willed,” George Swain said.