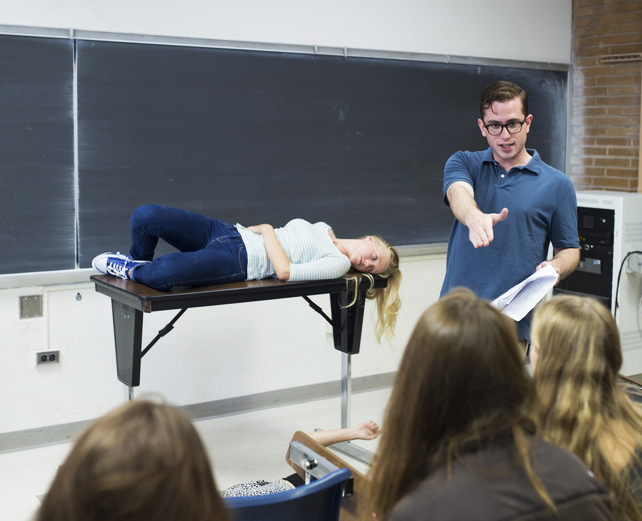 UCLA Extension alumnus Benjamin Walter was assigned to direct a 15-minute short during his Directing Certificate program. Walter’s thesis project became a feature-length film, “Pink Zone,” which has been screened at festivals domestically and internationally.
(Courtesy of Leo Volk Matus)

After a literal kiss of death infiltrates the pristine world of the “Pink Zone,” a group of girls must work to survive amid the dystopian reality of the outside world.

Already a nominee and winner of multiple accolades, including film feature and direction for the IndieFEST film awards and a selection for the 2014 Dances with Films Festival, UCLA alumnus Benjamin Walter’s “Pink Zone” has gone from a small-budget thesis project to an active competitor in domestic and international festivals alike, most recently placing in the Action on Film International Film Festival for Best Urban Film and Best Student Film.

PINK ZONE (2014) – Film Festivals Official Teaser [HD] from The One Who Knocks Productions on Vimeo.

Walter, writer and director of “Pink Zone,” said his long-held idea for a teenager-centered futuristic film began to take form while he was going through UCLA Extension’s Directing Certificate program. Though the mandatory thesis for the program was supposed to only be 15 minutes long, Walter said he went into the program knowing he wanted to make a feature-length film.

The plot of “Pink Zone” is centered on Emily, a privileged girl whose father is the creator of protective areas called “pink zones,” which isolate the planet’s small population of girls from a deadly virus transmitted by the male kiss. When the pristine world of the “pink zone” is suddenly infiltrated by boys, Emily and her female classmates must decide what to do while trapped in the throngs of virus-carrying boys and under the threat of a potentially deadly kiss.

“It’s like the ‘The Breakfast Club’ meets ‘The Hunger Games,’” Walter said.

Walter, a former film reviewer and native of Versailles, France, said the concept of this futuristic film was partly inspired by his love of science fiction films as well as John Hughes’ classic character-driven teenage films, such as “Sixteen Candles,” “Pretty in Pink” and “The Breakfast Club.”

“I wanted to go back to this era where we had all of these marvelous characters,” Walter said. “For me, the future was a new kind of ‘80s.”

With a budget of no more than $6,000, which consisted of mostly his own savings, Walter said the realization of the film – shot over the course of just 12 days, from July to August of last year – was partly because of the connections he made at UCLA Extension. Walter said one such friendship allowed the film to secure an aerial shot that can be seen in the opening of the film’s official trailer. Other locations where “Pink Zone” was filmed include Bunche Hall at UCLA and even the Avenue of the Stars.

Todd Bartoo, producer of “Pink Zone,” said he met Walter through the UCLA Extension program and invited him to his screenwriters group. The group eventually aided in the development of the script, which included characters that Bartoo said were purposefully ambiguous.

“The interesting thing about this film is that we really played with who is the villain and who is the hero,” Bartoo said. “The guy you think is the main villain, you actually wind up having a lot of sympathy for him when you see his fall from grace. You realize no villain thinks that he is the villain in his own mind.”

Courtney Welbon, a third-year undeclared student and actress in the film, said she was asked to audition for the part of Megan, Emily’s blind friend, by Walter after he had seen her audition for a short film he had made during the UCLA Extension program. Welbon said Walter’s directing style allowed her to have a large degree of freedom with the portrayal of this character.

“He also gave us a lot of room to improvise and make it our own,” Welbon said. “There is a lot of ourselves in the characters.”

Bartoo said as with any independent film and the lack of time and money, what becomes especially vital to a film as complex as “Pink Zone” are the actors and their ability to trust the director’s vision.

“Everyone is there because they really believe in the film. They believe in the director and the actors,” Welbon said. “If anything goes wrong, you can’t be the diva – you really need to help out with anything that they need you to do.”

Even with certain setbacks, which included halting production for a month because the lead actress broke her collarbone, “Pink Zone” managed to stay under the time limit that UCLA Events allocated for the use of Bunche Hall and obtain the locations, permits and sound equipment needed within budget.

In light of the several awards already won for this film, Bartoo said that though such recognition is always a pleasant surprise, he knew from the start that a film like “Pink Zone” would attract an audience because not many films out there are like it.

“I think personally if you are honest and you make the film that you want to make, it will find the audience that it deserves,” Bartoo said. “With any artistic endeavor, you go out there and you hope that people discover it.”