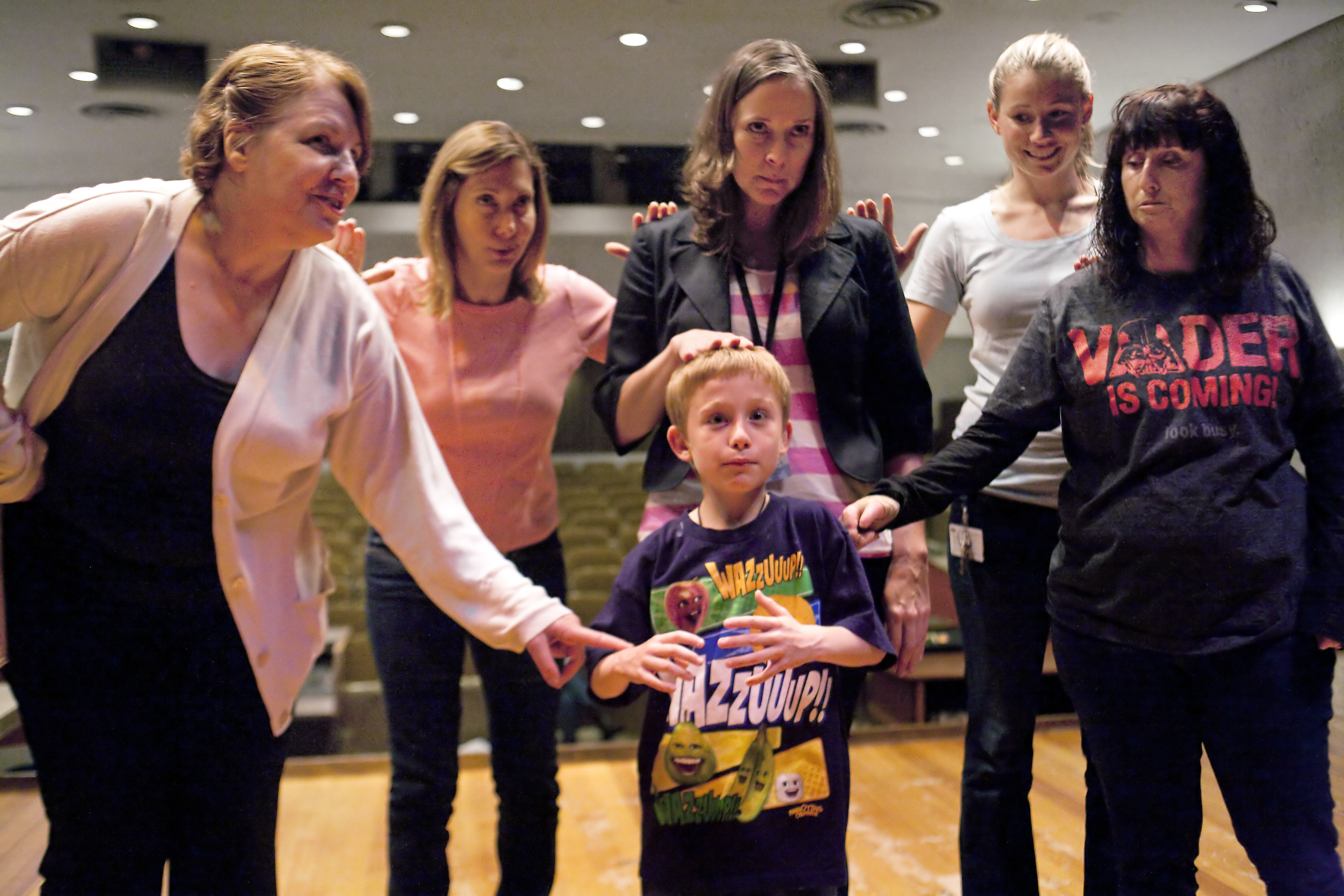 Navy veteran Karen Vasquez (right) works on an improvisation routine with her 8-year-old son Jacob Sipe (center) and a group of comedy leaders during an improvisation comedy workshop on Sunday.

On a dimly lit stage framed by red velvet curtains, seven people used their bodies and voices to construct a human machine.

Each person made a strange noise, moving their arms and legs to the sounds, as they frantically tried to stay in sync with one another.

The activity, which drew a chorus of laughter, was acted out on Sunday at a two-hour workshop hosted by UCLA for military families. The goal of the workshop: improve communication through the art of improvisation.

The “human machine” game taught participants about the importance of paying attention to the people they work with ““ a skill that requires active listening and responding, said improvisation leader Kiff VandenHeuvel.

“Don’t look for a way to fit in to the machine,” said VandenHeuvel, grinning at the comical noises and gestures that were being made. “Look for a way to add your own idea to it. These kinds of ideas can also be applied to real life.”

The event was organized to help families reconnect and adjust to life back at home, said Catherine Mogil, an assistant clinical professor at the UCLA Nathanson Family Resilience Center, which offers support and programs for families looking to enhance their ability to overcome challenges.

The center teamed up with the nonprofit group Rx Laughter, an organization that uses humor for its therapeutic benefits. VandenHeuvel was one of two trainers who were brought in from Second City, an improvisation and sketch comedy organization that teaches humorous games and strategies to develop communication skills.

The workshop was the first time that Second City had worked with military families. In the past, the organization has worked with various groups, including terminally ill patients, but Second City recognized that veterans could also apply these improvisation skills to their assimilation into daily life, said Jen Hoyt, the director of operations for Second City Training in Hollywood.

“Support groups are depressing,” said Sherry Hilber, the founder of Rx Laughter. “By using humor to express yourself, you’re seeing the problem in a different way, a better way.”

Karen Vasquez, a disabled Navy veteran, stepped onto the stage as her 8-year-old son Jacob Sipe held on to her arm.

“It’s cool being on stage,” Jacob said, slowly easing away from his mom. “But if there’s a lot of people around I get stage fright.”

As the intimate group began the session and sat cross-legged in a circle center stage, Vasquez explained that while working on a ship on active duty, exposure to dangerous building materials caused the development of health complications. Vasquez was diagnosed with scleroderma, a disease in which the immune system mistakenly attacks healthy body tissues, and sarcoidosis, an inflammatory disease of the organs that also causes joint pain.

“When I started taking Jacob to school, he saw the hands of other moms and started trying to straighten my fingers,” said Vasquez, motioning toward her hands, which are curled inward because of the disease. “These communication exercises are important because it helps me know how to explain to him everything that’s going on with me.”

Other games included “Conducted Story,” where each player had to start telling a story until another player was told to jump in and pick up where they had left off. The group erupted in a fit of giggles as their collaborative effort turned into a story about a fictional fruit called “applezingers.”

Afterward, they discussed that the purpose was to show that communication requires people to trust their feelings, while also listening carefully to others instead of themselves.

Soon, Jacob began comfortably running up and down the stage, energetically participating in the games and joining groups without his mom.

“Improv lets you see the world in sense of limitless possibilities,” Hoyt said. “Anything and everything can happen, but we want to teach that that’s OK.”