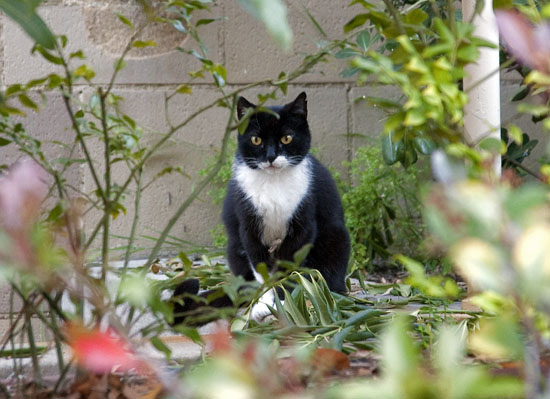 A feral cat hides in the shrubs outside the Humanities building. The number of cats on campus has gone down in recent decades but cat abandonment still occurs.

Dennis Lyday frequents a very different kind of hunting ground. One in the urban jungle of UCLA.

Every weekend during the dusk hours for the next month, Lyday, a student affairs officer, will set up traps with several volunteers in hopes of trapping a member of an elusive animal population.

The wait for a critter to enter the live trap baited with tuna can take up to three hours on some nights.

It isn’t a native species Lyday is after, but the campus population of feral cats.

He estimates there are 12 to 15 felines that have made their homes at UCLA, and the goal is to keep that number from growing.

The problem used to be much worse, however.

When Taimie Bryant, an animal law professor, started teaching at UCLA in the late 1980s, there were about 300 cats living on campus. While now, the felines are rarely seen except at night, she said one couldn’t go anywhere on campus without stumbling upon a cat. The problem was particularly bad near the North Campus Student Center, where people would feed the cats and large groups of the animals would linger in the area.

The goal is to catch the cats before they go feral, or human-avoidant, which can take up to three to four days after a domestic cat is abandoned. By maintaining feeding stations, the cat management program, founded by Bryant, monitors and helps curb the population.

Sometimes, Bryant said, they are too late in catching newcomers to the area and the cats have kittens, further propagating the population.

With students gearing up to move out of their apartments for the summer, Bryant said she is concerned that students might abandon their pets on campus.

“We know there are a lot of abandonments,” she said. “People think this is a safe place, but it’s not.”

Not only is it illegal to abandon animals, but it is cruel, Bryant said. She described the work she has done with the cats as emotionally draining.

“You’re dealing with animals that have been betrayed by their people,” she said. “You see it in those abandoned cats’ faces. It’s fear, it’s “˜where am I?'”

During her years on campus, Bryant has seen the results of cruel acts and UCLA’s heavy traffic on the cats on campus, noting individual instances of mutilation, sickness and other injuries.

She said pets stand a better chance in one of Los Angeles’ animal shelters, where high adoption rates and a “no-kill” policy lead to the best outcomes.

To Bryant, education about the problem is the best solution to the issue of animal abandonment.

“To the extent that people know these things, their behavior will change and those cats will benefit,” she said.

Facing almost certain death from cars and people alike on campus, Bryant said the best way to curb the population is through the trap-neuter-return method.

Lyday works with 20 other volunteers on the cat management program.

The process begins at the feeding stations, where faculty and staff volunteers set up and watch traps, waiting for a cat to enter the trap. Bryant said the volunteers never leave a trap unattended due to safety concerns for the animals.

If a feral cat enters the trap, they take it to the veterinarian for spaying or neutering and release it back where it was found. If the volunteers think the cat can be socialized, it enters foster care with one of the members. The foster-owner takes the cat to various adoption shows on weekends to find a permanent home.

The theory says that over time, the campus cat population will diminish due to adoptions and natural attrition ““ as long as the group can prevent new abandonment and kittens.

However, the trap-neuter-return method of population control remains controversial.

The process involves the perpetual feeding of the cats, which encourages outside cats to enter the colony and essentially creates an institutionalized, outdoor shelter for the feral cats, said Travis Longcore, a lecturer for the UCLA Institute of the Environment.

Trap-neuter-return presents a variety of environmental and public health concerns, he said, while advocates ignore the science that shows the method is ineffective.

“People need to recognize that TNR is more than those three letters,” Longcore said. “(TNR) provides no assurances that it’s going to be done well. These feral cat advocacy groups work really hard to undermine the science behind the impact to the environment and public health.”

Feral cats can carry fleas, typhus and rabies, as well as the parasite that causes the infection toxoplasmosis.

“Even though we’re not a wilderness here at UCLA, there are lots of resident and migratory birds that come through,” Longcore said. “Cats hunt birds.”

But this human-caused problem doesn’t have to be this way.

Longcore said if the university was on board, it could build a cat-run, or a large, enclosed cage to keep the captured feral cats.

“Once you’ve captured them, we shouldn’t be releasing them back,” he said, adding that this would be an alternative to euthanasia.

But for Bryant, TNR is still the only method of reducing the population, she said.

“The only way you can reduce population is to trap, neuter and return the cats,” she said. “You can’t get people to volunteer to kill cats.”